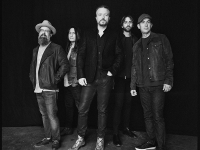 Venue: The Paramount Theatre
Event Phone: (206) 682-1414
Website: https://www.stgpresents.org/calenda...
Admission Price: $36 - $126
Purchase Tickets: https://www.ticketmaster.com/event/...
What happens after an artist has achieved his dreams? That was the major question Jason Isbell was asking himself leading up to the creation of his newest album, Reunions, recorded with the 400 Unit and produced by celebrated producer Dave Cobb. After all, four-time Grammy winner Isbell is at the top of his game. He is widely acclaimed as one of our best songwriters and possesses a devoted audience who have pushed his last two albums to the tops of the charts.

Frankie Valli and The Four Seasons