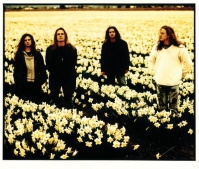 Emerging from Seattle’s burgeoning mid-1990s grunge scene, Candlebox quickly found mainstream success with their deep, lyrically-driven melodies and big radio hooks. Power anthems like “Far Behind” and “You,” from their debut, self-titled album exploded onto the charts propelling the album to sell more than four million copies worldwide.

*This event is 21+
There are no events happening in the near future.