Megadeth and Lamb of God 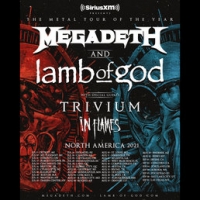 Venue: Don Haskins Center - UTEP
Event Phone: (915) 747-5234
Website: http://utepspecialevents.com/calend...
Admission Price: Starting at $20.00
Purchase Tickets: https://www.ticketmaster.com/event/...
Two of the biggest bands in heavy metal – MEGADETH and LAMB OF GOD – will be joining forces on a co-headline tour across North America this year, presented by SiriusXM. And to add to the firepower of this already formidable tour, Trivium and In Flames are joining, making this THE must-see heavy music package of the year. Tickets will go on general sale Friday, February 14th from livenation.com

MEGADETH, fueled by Dave Mustaine’s triumphant return to the stage following his diagnosis and recovery of throat cancer, will embark on their first North American tour since 2017. Speaking on the epic announcement, MEGADETH’s leader and frontman, Dave Mustaine says

"Hello me! I’m back again, better than ever and coming to a town near you with Lamb of God, Trivium and In Flames. If you want high octane metal madness this is the tour for you."

LAMB OF GOD released their first new music in five years last week with the single “Checkmate”. The track is the first to be released from the band’s self-titled eighth studio album, due out May 8th, which is one of the most anticipated and important metal records of the year. Commenting on their upcoming co-headline run, Mark Morton, lead guitarist of LAMB OF GOD, adds
There are no events happening in the near future.

University Of Texas At El Paso