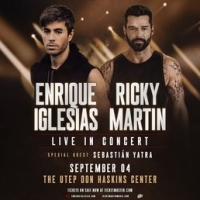 Venue: Don Haskins Center - UTEP
Event Phone: (915) 747-5234
Website: http://utepspecialevents.com/calend...
Admission Price: Starting at $73.00
Purchase Tickets: https://www.ticketmaster.com/event/...
Previously Scheduled for September 6, 2020 at The UTEP Don Haskins Center. Original tickets will be honored. For more information, please contact the original point of purchase.
GRAMMY Award-winning, multi-platinum powerhouse artists Enrique Iglesias and Ricky Martin are hitting the road together for the first time ever. The global superstars have built unstoppable solo careers with dozens of #1 songs and millions of albums between them, and are now joining forces live in concert this fall. Fans can expect to hear renowned hits from two of the biggest names in pop and Latin music on their historic North American arena tour. Latin music’s newest sensation Sebastián Yatra will join the outing as special guest. The GRAMMY nominee has become one of the most powerful Latin pop artists of his generation.

Produced by Live Nation, the outing will kick off September 5th in Phoenix and make stops in Houston, Los Angeles, Toronto, New York, Miami, and more before wrapping October 30th in Atlanta. Tickets go on sale to the public starting Thursday, March 12th at LiveNation.com at 10 a.m. local time.
There are no events happening in the near future.

University Of Texas At El Paso